A conversation on the Australian Tech Writers mailing list prompted me to dig up these old blog posts from 2008 and repost them here. It was a short impromptu series of the changing face of language, and how we as wordsmiths deal with it:

Spotted this one on Slashdot today. Reading the comments, I came along quite a few that expressed what appears to be complete and utter dismay at the introduction of new words into the language. For example, this one:

“Even if you can guess what it means, it’s always good fun to pounce on neologisms and jargon and grill the user why they are using them instead of a more traditional word.”

And then there was this one:

It reminds me of a time I was driving around Brisbane with a friend, it was Christmas time, and I noted a sign in front of a church that stated something along the lines of “Christmass Services”. I made an offhand comment about the mispelling, and my friend pointed out that the origin of the word indicates that it should, indeed, be spelled “Christmass” (as it derived from the Mass for Christ). The main point of her comment though was the fact that language is an ever-changing and constantly evolving beast. Wordsmiths – myself included – are often very quick to point out that something is not a word, or is a neologism, or just isn’t right for some other reason.

I was working on the latest fiction project last night, writing very short snippets in first person for several different characters, and consciously trying to alter the ‘voice’ of each section to suit that character. Not as easy as it sounds, but I’m reasonably pleased with the results, so far.

Language, in all its forms, shifts and changes with attitude and society. While I’ve never considered Merriam-Webster to be authoritative, and I certainly wouldn’t rely on it for any of my work, at least we ought to give them credit for trying to document the language as it is used, rather than how it ‘ought’ to be. And for that reason alone, it has a place in the world.

Not so long ago, I wrote this. To summarise, it was about new words adopted into the English language by the Merriam-Webster dictionary, most of which had their genesis in online culture. So it was with great joy that I came across this article which outlines some of the words that the internet has succesfully killed. It’s a lovely piece of work, I suggest you read it. My very favourite is at the top of the list – “friend”. Once a word meaning ” someone you knew, had a personal relationship with, occasionally spoke to, and frequently drank beers with” it now, according to the article, means “someone who found your email address and typed it into Facebook and/or LinkedIN. You may have met said person at a conference once, and possibly even conversed with for 5 or more minutes”. Of course, my second favourite is in there too – “startup”. Once, it meant “a company with a novel idea, service, product, or technology, and a vision on how to build that company into a successful, profitable entity”. Now, it means “a college graduate and three friends who have an incremental idea, service, product, or technology, and a vision on how to build that company such that it gets acquired by Google, Microsoft, or Yahoo (in that order), preferably within 18 months for at least 9 figures.”

The article is tongue-in-cheek – and readily admits it – but there’s a whole lot of truth in there (albeit disguised nicely behind humour). Language is evolving, and the major vehicle for change is that thing that has become so pervasive in our lives – the internet – and the culture that goes with it. Not only have new words entered – “w00t” and “mondegreen” instantly spring to mind – but ‘old’ words have had their meanings modified to fit the new medium. I maintain that it’s not a bad thing, it’s progress (whatever definition you choose to use for ‘progress’). Sometimes it seems like backwards progress, but it is nevertheless the direction we are heading. Don’t like it? That’s OK – the new generation do. And when they’re all grown up and complaining about the “young ‘ens”, well, that’s OK too. Their kids will be busy picking up the slack by then.

All The World’s A Stage, And All The Men And Women Merely Players 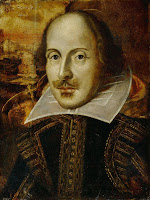 In what has become a somewhat impromptu series on the evolution of the English language, I just had to mention something I read whilst on holidays last weekend. I picked up Bill Bryson’s take on the life of Shakespeare whilst away. I’ve been interested in the great mystery of Shakespeare’s life for some time now. I own a copy of Nolan’s “Shakespeare’s Face” and have read numerous other accounts (or, more accurately, guesses) of his life and works. Add to this the fact that I have been wanting to start reading Bryson’s “A Short History of Nearly Everything”, and it was a fairly predictable attraction. Not incidentally, I’m intending to read his “The Mother Tongue” shortly too.

The book is quite short, and I finished it mere days after purchase – helped along by a few days in a warm climate with no pressing demands, I might add. It is written in true Bryson style, very conversational and light hearted, and he gives a lovely (or not so lovely, depending on your take on plague and wanton violence) picture of 16th century England, and Shakespeare’s somewhat unassuming – so far as we can tell – place in it.

However, my favourite part is this discussion of some of the many words that Shakespeare (allegedly) introduced into the English language:

And there was never a better time to delve for pleasure in language than the sixteenth century, when novelty blew through English like a spring breeze. Some twelve thousand words, a phenomenal number, entered the language between 1500 and 1650, about half of them still in use today, and old words were employed in ways that had not been tried before. Nouns became verbs and adverbs; adverbs became adjectives. Expressions that could not grammatically have existed before – such as “breathing one’s last” and “backing a horse”, both coined by Shakespeare – were suddenly popping up everywhere. Double superlatives and double negatives – “the most unkindest cut of all” – troubled no one and allowed an additional degree of emphasis that has since been lost.

Bryson goes on to mention the notorious variability of spelling known in early English society, noting this little gem –

Perhaps nothing speaks more eloquently of the variability of spelling in the age than the fact that a dictionary published in 1604, A Table Alphabeticall of Hard Words, spelled “words” two ways on the title page.

Of course, it just goes to show that the language has been evolving apace for many hundreds of years. Indeed, despite the naysayers it is happening much slower now than it was back in Shakespeare’s day. I can imagine that back then there were people (perhaps among the upper, educated, classes) who complained that artists such as he were mangling the language, and doing things the wrong way, although the attitude towards English was reasonably fluid then, thanks to Latin and French being considered ‘proper’. Surely, as time went on, and English took hold first in business and legal matters, and later in the sciences, that there have been people unwilling to accept change, even as it occurs around them. Nothing has changed in that respect, I imagine, it’s just that now they have access to the internet – and a world full of people reading their opinions. Hopefully, it won’t impede the progress overly. Much as I still cringe a little at “truthiness”, “coopetition” and “incentivise”, I am completely capable of embracing the words that I like – “blogosphere” is one of my favourites, along with “jumping the shark” and “backronym”. It’s only a matter of time before the language evolves to the point that our grandchildren will be almost incomprehensible, and Shakespeare’s scribblings will have taken another step towards total obscurity.

What are you looking for?

Need Books? Of Course You Do!

Where the bloody hell are ya?!

Who wrote all this stuff?

All writing on this blog is the work of Lana Brindley and does not necessarily reflect the view of SUSE or any other group with which I am affiliated, except where I have used direct quotes (which are attributed to the original authors where possible). All images were either taken by me, shared under their individual licencing requirements, or obtained as stock photography.